When the 6.3 magnitude earthquake hit the New Zealand city of Christchurch on 22 February 2011, following the 4 September 2010 earthquake, Kia Kaha became the iconic phrase used by family and friends supporting the city in their time of need. The New Zealand Herald reported the use of the phrase by Prince William at a memorial service on 18 March 2011 "drew applause and tears from tens of thousands of mourners".[6]

One of the hardest aspects of the earthquake for Christchurch firefighters was having to respond to the needs of the very community that we were also a part of. Many of our own homes were severely damaged or completely destroyed. Even now nearly one year on the results of geotectonic surveys have meant that some of our own homes are in the suburbs that have now been declared "Red Zoned" that is they are no longer deemed suitable for housing, communities are being erased from the map of Christchurch.

Here is some information (from Wikipedia) about the significance of the words 'kia kaha':

The idea behind the shirts is to raise money to assist our own Union members who have experienced loss resulting from the earthquake. They sell for twenty dollars and all profits will be used to assist those firefighters in need.

On the front of the t shirt is the New Zealand Professional Firefighters Union logo and the date and time of the earthquake with the words Kia Kaha. On the back of the shirt it says FIREFIGHTERS – FIRST in when SECONDS count!

To Purchase one of these shirts, please follow the below instructions:

The system that has been set up is only for group purchasing.

1]        One person in each station/area, organises a list of names, sizes and numbers of t shirts

3]        The UFU office will send the order over to New Zealand and email you through the banking  details for the money to be deposited.  Once the money is received by the Secretary (Michael Balmer) Christchurch Local, the shirts will be sent to the organiser for distribution.

The shirts are $20.00 which includes postage.

If you require any further information, please contact the Union Office. 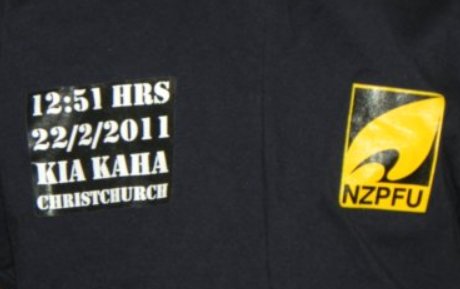